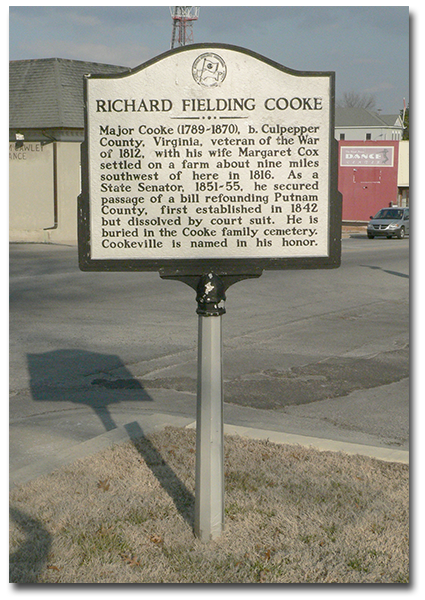 ANOTHER VETERAN GONE - Major Richard F. Cooke, for many years a prominent citizen of the State, died of paralysis at his home in Putnam County, October 15, 1870, in the 84th year of his age. He was born in Culpepper County, Virginia, July 8, 1787; was raised in Greenville District, South Carolina; came to Maury County in 1810, and settled in Jackson County in 1812, which was subsequently divided, and the county seat of the new county, Cookeville, was named in honor of the distinguished deceased. He was an officer in Woodfolk''s battery under General Jackson, in the war of 1812; was twice a member of the Senatorial branch of the Legislature; was a man of commanding presence and popular address, and for near half a century was a leading citizen in the mountainous portion of the State bordering on East Tennessee. He was a man of considerable force of character, of decided convictions and attachments, of conservative temperament and a well-balanced mind. His influence, which was extensive, was exerted for the honor and glory of his country, and for the good of society, of which he was a Christina member. He was the youngest of three brothers that have died this year, and is the father of Col. Watson M. Cooke, of Cooke, Settle & Co., and of Col. Bolivar H. Cooke, of Bolivar H. Cooke & Co., prominent wholesale merchants of this city. Major Cooke was one of the early pioneers to the State. The write has heard him say that he visited Nashville when Capitol hill was covered with a forest of cane, and the corner of the city Squire, now occupied by the Ensley block, contained a rock tavern, the only hotel in the village. Until he lost his sight, some ten years since, he had been a subscriber to the BANNER for upward of forty years. Major Cooke was one of our most useful and influential citizens, and his death will be lamented by a large circle of relatives and friends throughout Tennessee.