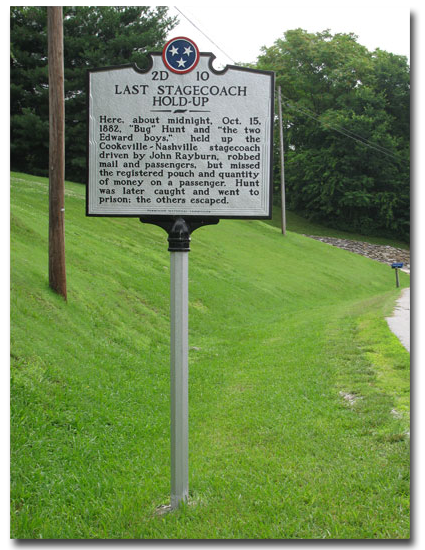 LOCATION: This sign is located on Highway 70N just about a mile East of the Putnam-Smith County Line. The sign is on the north side of the road.

Another crime, famous in the region, was the last recorded stagecoach holdup up in Tennessee, which took place in Putnam County in 1882. Near midnight on October 11, "Bug" Hunt and "the two Edwards boys" stopped the Cookeville-Nashville stage driven by John Rayburn, at Pekin, a post office sixteen miles west of Cookeville. There were five passengers on board, and according to one, a Miss Z. Martin, the masked robbers ordered them out of the coach, relieved the men of their pocket books, and search the mail pouches, splitting them with a long, sharp knife. The driver tried to hide $2.50 in his mouth, and one passenger stood on two twenty dollar gold pieces, but the thieves were not fooled and seized the money. Ett Martin''s brother, however, managed successfully to conceal most of his coins inn his shoe, and the robbers missed the registered mail pouch, the principal target of the robbery.

After the thieves had disappeared into the darkness the stage rumbled on to Chestnut Mound, where word of the robbery was sent back to Cookeville, and Sheriff Henry J. Brown immediately organized a posse and started in pursuit of the outlaws. Several days later Jeff Lea, Bob Maddux, and David Haynes apprehended Hunt, who was tried and sent to prison. The Edwards boys escaped. (Pages 90-91).