RELATIONSHIP TO ME: They are my paternal grandparents. 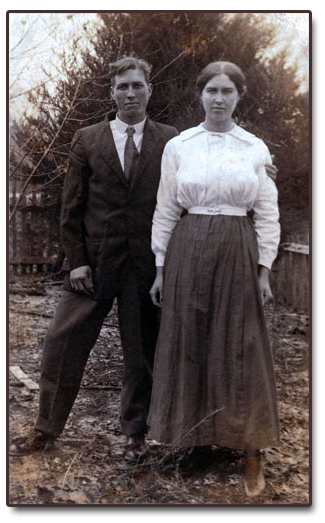 22 January 1889:John Hilllary Price was born to Thomas Bloomfield and Harriet Verina (Davis) Price in Putnam County, Tennessee. He was the 2nd child and first son.

5 June 1894:Ova Edna "Edney" Messenger was born to Samuel M. and Louisa Canzada (Breeding) Messenger. She was the last child of four children.

Oral History: Sometime between 1900 and August 1903, Willis Davis (John's maternal grandfather) moved in with John's family. Willis, being in his seventies, started exhibiting signs of dementia. One afternoon, Willis left the house. Harriet hollered at John to go with him and follow him. Willis got out near a fence row. He kept trying to climb over the fence. Everytime he tries, he would get his leg on the fence and then fall to the ground. John eventually convinced Willis to return to the house.

Oral History: Harriet told John not to climb trees. He disobeyed her and climbed up in a tree and fell out, injuring his shoulder. Fearing that he would be in trouble, he did not tell his parents that he was injured. This injury resulted in him being unable to use his left arm for the rest of his life.

About 1906: The Price Family had a Family Portrait made.

Oral History: Edney had a horse named "Lion" that she rode. One day John challenged her to a race. She and Lion won the race. Sometime when she was an adult, someone bought her a ceramic horse that looked like Lion. A picture of the horse is below. 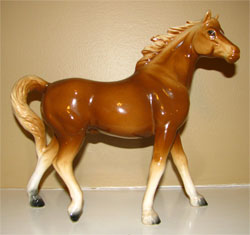 Oral History: John always told Edney that he planned on marrying her one day.

2 September 1915 (Thursday): John and Edney were married by T. B. Jackson in Putnam County, Tennessee. On 30 August 1915, John and Henry Cleveland Slagle went to the court house and applied for a license. The license was returned on 4 October 1915.

27 December 1915: John H. Price & Andy Phy sold to W. N. William the 8.5 acres that John bought from Whitson & Shipley for $170. John originally sold the land to Andy Phy. Andy paid him in full and took possession of the land. Currently, there is a crop of corn on the land which Andy reserves for himself. Andy joins in this conveyance. (Putnam County, TN Deed Book #7, Page 553).

1 September 1916: Sid Davis goes to court and swears "That the statements he made on yesterday about the family of John Hillary Price were not true." It is unknown at this point what those statements were.

18 May 1917: Congress passes the Selective Service Act of 1917. All males aged 21 to 30 were required to register for military service.

3 August 1917: John Hilary Price received a letter from the War Department to report to his local board for a physical examination on 10 August 1917 at 8 o'clock am. His serial number is #57 and order #222. ( Click Here for a Copy of His Notice).

1922: John and Edney's second daughter is born (she is still living).

Oral History: During her pregnancy, Edney contracted the measles.This resulted in Thomas' death.

27 January 1926: Edna Price registered a deed at the Putnam County Courthouse for property she transferred to her brother, Salmon Messenger. The property was her inheritance from her father. Tracts of land mentioned in the deed are Henry Bullington's line, John H. Price's line, the Old Messenger Place, Sam Price's line. (Putnam County, TN Deed Book #20 , Page 418-419).

Oral History: A neighbor of John Price's passes away. The day of the burial, it was pouring down the rain. John insisted on digging this person's grave even though the weather was so bad. As a result, he caught a cold which progressed to double pneumonia. The doctor was summoned out to examine him. He first said that in 10 days he would either get better or he would die. During the time that he was sick, he trembled so bad that the bed shook. They piled as many blankets on him to keep him warm. Their efforts were futile. He passed away.

5 October 1936: John and Edna deed 3 acres of land to John's niece Vallie Jackson (daughter of sister Mary Lou Phy). These three acres came from land that Edna inherited from her father, Sam Messenger. (Note: This is the date the deed is recorded.)

3 October 1938: Mrs. John Hillery Price executes a deed to her daughter, Magdalene Ford and her husband, Herbert. Other tracts of land mentioned: Salmon Messenger's line, the old road, Jackson's line, and Slagles line. This is a portion of the land conveyed to Edna from Salmon Messenger in Deed Book #20, Page 418. (Putnam County, TN Deed Book #35, Page 213).