RELATIONSHIP TO ME: His mother, Sarah "Price Savage Poteet, was a sister to my 2nd great-grandfather, Thomas Price. Therefore, Samuel T. Poteet is my first cousin twice removed.

BORN: He was born on 17 April 1847 in White County, TN. He was the third son and fourth child born to James Poteet and Sarah "Sally" Price (widow of Kendall Savage).

1850 - 1860: The family moves to Springfield, Limestone County, TX. Sarah Poteet writes her sister, Catherine Price Walker, that her husband James died 1 March in 1857. She expects to stay in Texas perhaps another year before coming back. Sarah died 16 May 1860. It is unknown whether she made it back to Tennessee or not. The children were back in Tennessee by the 1860 Census. The census day was 1 June, but the census taker took the information on 17 June 1860. The children were living with their half-sister Mary Polly Savage Cash, who married Elias Cash.

9 April 1861: The Confederate States of America fired on Fort Sumter in South Carolina

8 June 1861: Tennessee seceded from the Union

25 July 1861: Sam enlists with the 25th Tennessee Infantry Regiment, CSA, Company E in Tullahoma, TN for 12 months. He was enrolled by Lt. A. B. Hardcastle. He was fourteen years old at this time. Between 25 July - 31 October 1861, he was present. On a roll dated 6 April 1864, he was listed as discharged August 1862 by reason of being a non-conscript (he was under age). On a company muster roll dated 1 October 1861 at Camp Myers, he was listed as "sick." His age is listed as 25 years old. That's the last record of him for this company.

31 October 1861: Sam's maternal grandfather, George Price, dies in White County, TN. In his will, he completely cuts Sam, his brother (James Poteet), his half-sister (Polly Cash), and his cousin, Marion Price, out of his will.

"Further it is my will and desire that all the rest and residue of my estate both real and personal or mixed, debts due or to become due, after the payment of my debts shall be equally divided between my children. I do not intend that my Grand children shall have any part of my land. But I order and appoint that my Executors shall pay over to each one of my Grand children whose farther or mother is dead at this time and who may be alive at my death (except James Poteet and Samuel Poteet and Polly Cash who shall receive nothing of my estate) the sum of one hundred dollars each in full of their respective claims. I also except Marion Price. I don't intend for him to have a dollar of my estate."

August 1862: Discharged from 25th Tennessee Infantry CSA because of being a non-conscript.

3 December 1863: Sam enlisted in the 1st Tennessee Mounted Infantry Regiment, USA, Company B, in Carthage, TN. He is listed as being 19 years old. He is only 16 years old at this time.

September & October 1864: He is listed as present.

28 November 1864: While attending a revival at the Cherry Creek Church, Sam was killed by someone in Champ Ferguson's gang of merry men. He was shot through the head and probably dead before he hit the ground. Amanda McDowell attended the revival that night and recorded the events in her diary. Below is her account of what happened that evening.

Legends & Stories from White County, TN
Coral Williams
George Peabody College for Teachers
June 1930 as a requirement for Master of Arts Degree
( posted at the Daniel Hastings website by Wayne Hastings)
At another time Jessie Hickman was holding meeting at the same place; he had been warned not to hold night meeting for the bushwhackers had planned a raid on the church house that night. Four Union soldiers were attending, but they had posted a guard below the house. He was to fire a shot in case of danger. The bushwhackers surprised the guard and he fled without firing as he had been instructed. The bushwhackers surrounded the house, spotted the Union boys and fired. One bullet entered Sam Poteet's head in the back and came out at the forehead. He fell dead. As the boys fled, the bushwhackers fired time after time. No other soldier was hit but some of the bystanders were struck by stray bullets.
When Poteet was shot the bushwhackers entered the house and one called, "If you don?t hush, I?ll make it silence for you in hell." There was complete silence for a moment but suddenly an old woman rushed to the back door, jerked it open and yelled, "God-dern, come out of there, I've got the door open now." There was another general stampede as the bushwhackers fired again and again.
Poteet was left lying in the church until the next day, when the Union boys reinforced came back and took the body for burial. He had been stripped of his boots and other clothing. Hildreth [Abner Hildreth?], one of the bushwhackers, was discovered with them on his person when he was shot under his own woodpile by Mont Weaver [Montraville Weaver]. Weaver drew the body out from its hiding place and ran his horse over the body. He was put in jail, after the war, for his brutal murder of Hildreth, but the case thrown out of court when tried because it was committed in the war period.
Reference: Mrs. Bill Wilhite, June, 1930.

History of White County
Monroe Seals
Pages 9-70
Cherry Creek. Some Federal soldiers belonging to Captain Charles Burgess' command attended church at Cherry Creek. Burgess advised against the attendance, and remained under the hill having laid down the fecne so that easy egress was possible. It was night, and Rev. Jese Hickman was preaching. Soon Burgess heard hoof beats. Captain Champ Ferguson was coming. Ferguson and his men opened fire. They were singing in the church and Sam Poteet was shot in his open mouth and a woman, Ann Gooch, was accidentally wounded. One Federal soldier remained in the house while all the others made a hasty exit out the back door. The one remaining was a lad who laid down on the floor between the benches and the woman put their feet on him, thus hiding him with their dresses.

Memorable Historical Accounts of White County and Area
E. G. Rogers
Page 55
The Cherry Creek Community was the scene of much skirmishing during the Civil War. According to Blankenship's Fiddles in the Cumberlands, it was on a rainy Monday night that several of the community had gathered at the church for services where a meeting was to be held. The meeting was still in progress, and some Federal soldiers, belonging to the command of Captain Charles Burgess, attended church that evening. Burgess advised against their attendance, since he suspected trouble. He waited outside and laid down the fence for a possible quick escape. Confederates led by Champ Ferguson who quickly opended fire. Sam Poteet was shot in the mouth and Ann Gouch was wounded. One Federal remained in the house and was hidden by the skirts of women crouched upon the floor while the others made their exit by the back door. Another says Fayette McDowell was also wounded. "The whole house was in an uproar -- soldiers swearing and roaring and women screaming."

Summer of 1999: My father took me out to the Saylors Cemetery in White County, TN. We quickly located the Price Family section located in the very back of the graveyard. Buried not far from the Price graves was the tombstone for Samuel T. Poteet and Frances A. D. Poteet. No other Poteets were near by. At this time, I had no idea who these people were, but I felt that they were related in some way to the Prices. I became intrigued with Sam, because the death date on the tombstone indicated that he died some time in the Civil War. Further in my research, I discovered "how he was related." 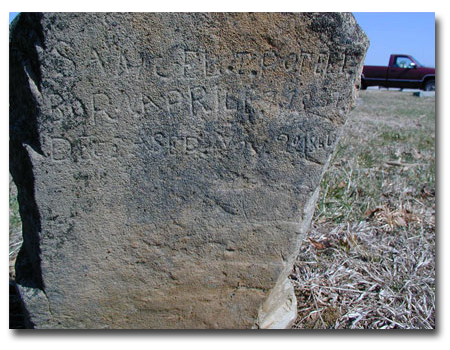 Due to the passage of time and the effects of the weather on the tombstone, the dates were extremely difficult to read. The death date was easily confirmed by military records. However the birth date could be April 7, April 17, 1842 or 1847.

Summer 2006: I ordered a military headstone for his grave.

8 December 2007: The Sons of Union Veterans from Missionary Ridge Camp #63 drove to the Saylors Cemetery in White County, TN. They helped to dedicate the military marker for Sam's grave. 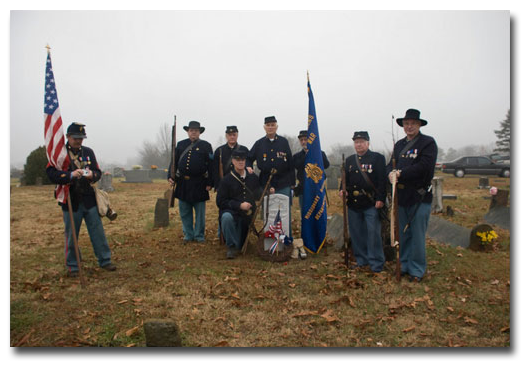 The following Missionary Ridge Camp #63 members participated in the event:

These men did an absolutely WONDERFUL job in the dedication ceremony. 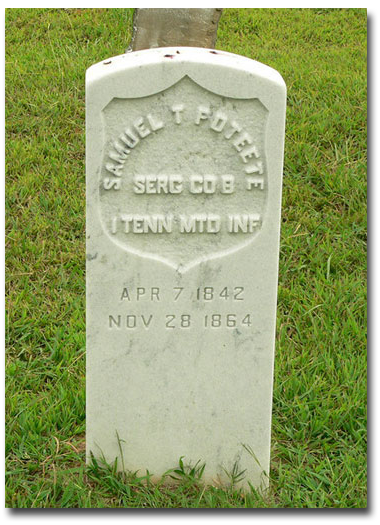