RELATIONSHIP TO ME: They are my paternal great-grandparents. 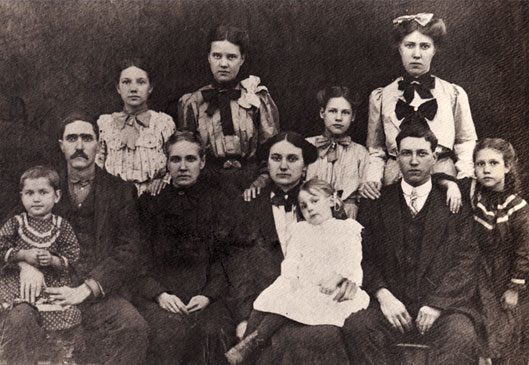 15 January 1865: Harriet Verina Davis was born to Willis D. and Mary "Polly" (Phy) Davis. She was the fourth of five children. She was named for the First Lady of the Confederacy, Harriet Varina Davis.

11 June 1865: Thomas Blooomfield Price was born to Thomas and Rosa (Weatherford) Price in White County, Tennessee. He was the youngest child of the couple. He was named for his father, Thomas Price, and his maternal uncle, Bloomfield Weatherford.

February 1885: Thomas Bloomfield Price married Harriet Verina Davis. The copy of the marriage record burned when the Putnam County Court House caught fire in 1898. The only surviving record is a hand-written note, believed to be written by Thomas Price, that was found in Clay Price's trailer. The date in February is missing. The birthdates of Thomas and Harriet's children are also written on the paper. 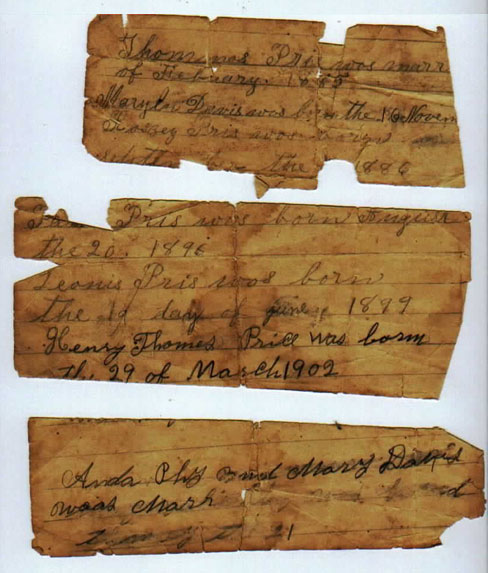 4 September 1886: Thomas and Harriet's first child, Rosa Price, was born. She was named for Thomas's mother.

22 September 1890: Jeff Price and wife, Jane Price, Thomas Price and wife Harriet Price sold 100 acres of land in Civil District #9 to F. G. Howard for $75. This was land from the late Thomas Price and widow Rosy Price, who has her dower and homestead. Bounded by James Hickey on the East, F. G. Howard and D. F. Southard on the South, G. P. Hampton on the West, and Charles Oakwood and Hickey on the North.
(White County Deeds, Roll #70, Book 35, Pages 423-424)

09 June 1900: Daughter Leona "Jackie" Price was born. Given the date on the 1900, the census taker must have visited the home when Harriet was almost ready to deliver. 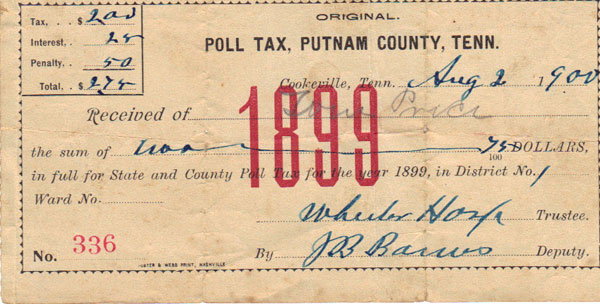 7 December 1909: Thomas and Harriet purchase six acres of land from Joe and Manda Farris for $100. $50 was paid in cash, and the remaining $50 is due twelve months from then. Thomas's name is listed as P. P. Price instead of T. B. Price. The land is located on the east side of Cookeville and Bunker Hill Road; bounded on the north by Perry Essex; on the south by Jim Sliger. This tract of land was sold to the Farrises by Jim Sliger. (Putnam County TN Deed Book 5, Page 84)

1 October 1912: On or before this date, Thomas Price promises to pay Jere Whitson Hardware Company $7.

11 April 1912: Thomas Price, John H. Price, and Andy Sliger promises to pay James Price $140, half in six months and one half in twelve months. The interest on the note is 6%. 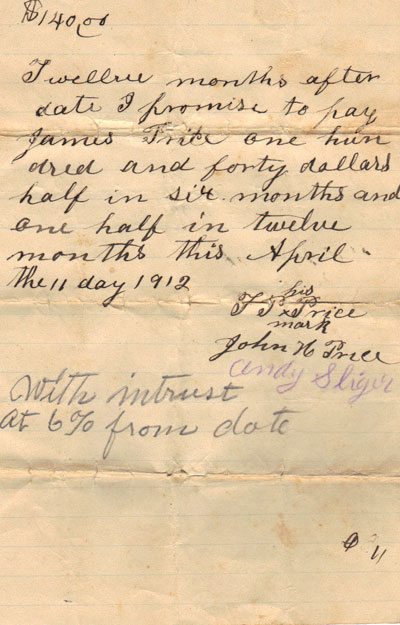 04 February 1921: Harriet Price conveys the land that she and Thomas purchased in 1909 to her son John Hillary Price: "Whereas, heretofore, on the 7th day of December 1909, a deed to the lands herein described was executed to me and my husband, P. P. Price; and whereas, the consideration set out in said deed to us was paid by our son, John H. Price, his father, the said P. H. Price having died; now in consideration of the premises, and the love and affection I have for my said son, I, Harriett Price, hereby transfer and convey unto said John H. Price . . .". The land is bounded on the north by lands owned by Mrs. Perry Essex and on the south by lands owned by Jim Sliger. (Putnam County TN Deed Book 15, Page 180).