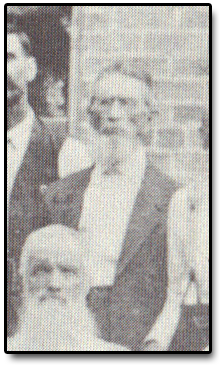 Mrs. Williamson Dies - Mrs. A. K. Williamson, 78, died at a Nashville hospital, Sunday morning, July 13th, of heart trouble. Mrs. Williamson, better known by her many devoted friends as Aunt Sarah, had been in the hospital for the past two weeks. She had lived in Algood for many years and was endeared to the hearts of many. She was a devout Christian and had been for many years a member of the church. She is survived by her husband, Amos K. Wiilliamson, a sister, Mrs. Addie Bohannon, a half-brother, Doc Bilbrey, of Rickman, and several nieces and nephews. Funeral services were conducted at the Methodist church here by pastor, Rev. S. M. Keathley, and burial took place in the Algood cemetery. The quantities of lovely flowers showed that she had many friends. Aunt Sarah was a friend to all and will be greatly missed. Among those who came from out-of-tow to attend the funeral of Mrs. Williamson were: Mr. and Mrs. Hansford Maynard and Mr. and Mrs. Gallent Anderson, of Cookeville, Route 1; Mr. and Mrs. Charles Julian and daughter, Janette of Crossvilel; Mr. and Mrs. George Gentry, Mrs. Jonathan Rash, Mrs. Albert Matheny, Mrs. John Cornwell, of Cookevillle; Mr. and Mrs. Morgan Ferguson and family, of Overton county; Mr. and Mrs. Sid Willett, of Brotherton, Route 1; Mr. and Mrs. Doc Bilbrey and family, Sam Willett, Mrs. Laura Stafford and Mrs. John Matthews, of Rickman; Mr. and Mrs. Felix Bilbrey, Mr. and Mrs. Cooper Deck and Mrs. Mac White, of Livingston.


Amos K. Williamson of Algood Dies -- Putnam county's last surviving Confederate soldier, Esq. Amos K. Williamson, 97, died on last Friday at his home in Algood. He was born and reared in Granvile community and belonged to one of the well known pioneer families of Jackson county until forty-five years ago, when he moved to the then new town of Algood, where he continued to reside until his death. During the active years of his life Esq. Williamson was a farmer and carpenter. He was a man of splendid intelligence and was a Christian gentleman who enjoyed the confidence and esteem of all who knew him. He served throughout the Civil War in the Confederate Army, being a soldier in Col. Sidney S. Stanton's regiment. He was a Confederate pensioner. He was twice married, but survived both his wives. He had no children. He formerly served, for several years, as a Justice of the Peace of the 19th district and was a useful and influential member of the County court. In his boyhood, he united with the Cumberland Presbyterian church at Granville, and was one of the charter members of the Cumberland Presbyterian church of Algood. For the past thirty years he had been a member of the Presbyterian church, U. S. A. He had served for more than fifty years as an Elder and at the time of his death, was probably the oldest Presbyterian Elder in Tennessee. Esq. William was no doubt, the oldest person in this county, a man of unquestioned honey and integrity, his influence was always exerted for the right, as he saw it, and he did well his part in life, and died "full of years and of honor."