By winter of 1886, John Edwards had been incarcerated in the Southern Illinois Prison for just over two years. Including one year of imprisonment in the Tennessee State Penitentiary while awaiting trial, he had completed three years of his five year sentence. It was during this time that his health began to decline.

By May 1886, he was admitted the prison's hospital with consumption. His condition worsened as time progressed. While in the hospital, the prison's Chaplain, Thomas M. Griffith, visited John and ministered to his spiritual health. Fearing that he was not long for this world, Chaplain Griffith wrote the following letter to James and Eliza Edwards, John's parents.

I have just visited the Hospital where I found your son. He told me that his father and Mother were Baptists. I am a Baptist minister. I have been chosen Chaplain of the this prison.

I will say to you that I will do all in my power to make the case of your son a special one as I am led to believe he is not long for this world. He has the consumption and a very bad type of it I think. My mind is his case is hopeless. I shall talk to him from time to time as I think he is able to bear it.

You can write me if you choose and anything communicated will be received if possible in the spirit in which it is given.

May the Lord bless and Keep you to enter his everlasting Kingdom where heartaches and living troubles will cease to be.

I am Your Bro in the dear Lord.

Immediately, James and Eliza consulted an attorney and discovered that the only way to get their son released was to obtain a pardon from President Grover Cleveland. They circulated a petition throughout the neighborhoods in Wilson, Dekalb, Smith and Cannon Counties and gathered over 275 signatures. The preamble to the petition is given below.

To His Excellencey Pres. Cleveland
President of the United States
at Washington D. C.

Dear Sir, We the undersigned Petitioners will state to you that our neighbor and friend James Edwards and wife, Eliza Edwards has a son by the name of John Edwards now confined in Chester prison of the state of Illinois, he was convicted by U. S. Court in Nashville Tenn. before his Honor D. M. Key on the charge of mail robery (sic)for the term of five years. he has served out three years of is time and we are now informed by the chaplain of the prison by letter dated Aug 5, 1886 that he is in the last stage of consumption confined in the Hospital of said prison. The proper evidence of these fact will accompany this petition.

We the Petitioners will further state that we are acquainted with Jas. Edwards and his wife they are people of the best families of our state, are christian people strict members of the Baptist Church. They are citizens of Wilson County, Tenn. We being citizens of Wilson, Dekalb, Smith and Cannon Counties.

And as we are informed there is no hopes of John Edwards recovery.

We will furnish you the evidence of the fact upon the consideration of this Petition.

Remain your most obedient citizens of the U. S. and state and Counties above referred to.

They enlisted the help of the prison's physician and the warden. Dr. Lewis Dyer wrote the following letter.

I am requested by the father of John Edwards, a U. S. convict in prison since Nov. 30, 1883, and for the term of 5 years to certify as to his health. A pardon of course is the object desired. I most cheerfully comply with this request.

This man has been a most faithful and exemplary convict in all respects working industriously until the latter part of last winter, when his health began to fail. His disease is Lung complain, and in all human probability if will soon develop into confirmed consumption unless a change of condition and a change of life can be secured through execution clemency which I most earnestly advise. He has been in hospital going on three months. He has every attention, and shall continue to have, in our power to bestow - but he cannot be saved here.

To Whom It may concern:

John Edwards; sent here from the United States Court, middle district of Tennessee, has been in all respects a good prisoner, obedient to the rules and faithful in the performance of his tasks.

He is now and has been, for several months, confined in the hospital, and there is very little hope of his recovery.

The application and all of its enclosures were received and filed at the Office of the Pardon Attorney in late August 1886. The Clerk of Pardons, Alex Boteler (See Photo of Alexander R. Boteler 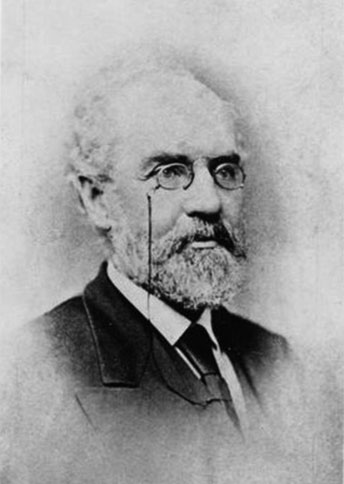 ), recommended the pardon application to the Attorney General on 21 September 1886.

At the October term, 1883, of the United States District Court for the Middle District of Tennessee, John Edwards 0 the defendant in this case - was convicted on a charge of robbing the mail and sentenced to five years imprisonment in the Southern Illinois Penitentiary, Illinois.

The application for this young man's pardon is based solely upon the precarious condition of his health - it appear from the accompanying certificate of Dr. L. Dyer, physician to the prison, that "his decrease is lung complain" and that "in all human probability, it will soon develop into confirmed consumption unless a condition and a change of life can be secured through Executive clemency."

He has already served the greater part of the time for which he was sentenced and, is same, "has been a most faithful and exemplary convict in all respects, working industriously until the latter part of last winter when his health began to fail" He is not confined in the Hospital and the Doctor expressed the opinion that "he cannot be saved where he now is " -

The Acting Attorney General George A. Jenks agreed with the recommendation and sent the pardon request to President Cleveland on 21 September 1886.

Meanwhile, the Edwards family was getting antsy while awaiting word on the outcome of their pardon application. On 30 September 1886, they enlisted the help of Honorable James D. Richardson, who was serving as the TN delegate to the House of Representatives in Washington, DC. His letter follows:

Mr. Edwards who resides in Wilson Co. Tenn. has a son confined in prison at South Chester Ill. as I am informed.

He was convicted in the U. S. Court at Nashville, Tenn. and has been confined for some time. My information is the prisoner is in the last stage of Consumption, will probably not live through the winder. An application has been made for his pardon and I desire to ask its consideration as early as practicable . Will you please write me status of this application. I met you at your office and made your acquaintance in ?conviction? with application for pardon of a young man in Coffee Co Cash Spring. I called with Mr. Neal M. C. ???? State.

On 6 October 1886, President Grover Cleveland officially pardoned John Edwards of his crime based solely on the grounds of his failing health.

Granted Soley on the ground of the Convicts fail health
Oct 6.1886
G. C.

Finally, on 14 October 1886, John Edwards was released from the Southern Illinois prison and returned home to his family in Wilson County, Tennessee. Since he was suffering from the last stages of consumption, his health was rapidly failing. He died at the home of his parents on 7 January 1887 and was buried in the family cemetery near the Edwards home place. (See Headstone for John Edwards 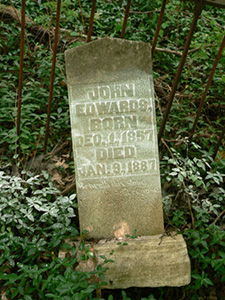