Anyone who has ever delved into Putnam County history has undoubtedly read the story of the Stagecoach Robbery committed by "Bug Hunt and the two Edwards Boys." Numerous articles have been written about this event including but not limited to McClain, DeLozier,and Hopson. (FOOTNOTE) Located on the outskirts of Putnam County on Highway 70 (about two miles East of the Smith-Putnam County line) is a historical marker that commemorates this interesting piece of Putnam County history.

When I began researching the stagecoach robbery, my goal was to find as much information as possible about this historic event and present a detailed report of the events that transpired. To my complete surprise, I discovered that the details presented in the traditional version of events do not match the facts in historical records (FOOTNOTE)

The historical marker on highway 70N succinctly summarizes the traditional version of events. 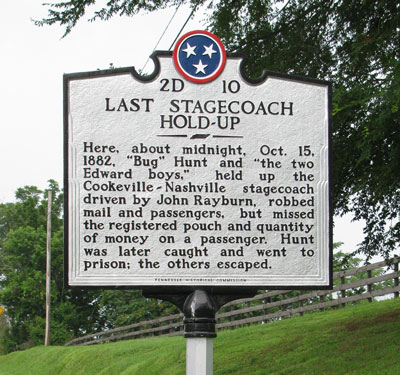 The following is a description of the discrepancies found between the traditional version of events and the historical facts.

The following account of the Stagecoach Robbery of Putnam County, Tennessee is based on historical records created in 1882 - 1888 time frame.