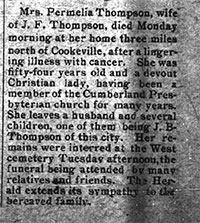 Barnhart, Father of Ike: Ike Barnhart and sister arrived here to-day from Michigan. Mr. Barnhart informs us that his father died last week, and that Mrs. H. S. Shaffer, who was known to many of our readers also died recently at her home in Sherwood, Mich. [Date: 1/17/1906, Vol. III, No. 50, Page 1]

Carr, Sam: Sam Carr formerly of this place, was run over by a train at Bessemer, Ala., Christmas day and died of his injuries Tuesday, Dec 26, 1905. His remains were brought to this place for burial. He leaves a wife and several small children in destitute circumstances. [Date: 1/3/1906, Vol. III, No. 47, Page 1]

Chastain, Elisha: Elisha Chastain, formerly a citizen of this place and well known in this section, died at his home in Nashville Sunday morning and was buried Monday in that city, Elder Sewell, of the Christain (sic) church conduction the services. [Date: 1/3/1906, Vol. III, No. 47, Page 1]

Cumby, Mary: On Tuesday evening, March 6th, 1906, Mrs. Mary Cumbee, wife of A. Q. Cumbee, died at her home two miles south of Cookeville. Mrs. Cumbee had been an invalid for several years and the writer, who visited her many times during her illness, can say that her faith in the Lord enabled her to endure patiently her affliction. She was a good wife and mother, an affectionate sister, she was of a generous and graceful hospitality and will be no stranger in the house of God. She leaves a husband and two small children, a great many relatives and friends to mourn her loss. Her remains were laid to rest in the Cookeville cemetery in the presence of a large crowd. [Date: 4/4/1906, Vol. IV, No. 9, Page 1]

Dorman, Adaline: Mrs. Adaline Dorman died suddenly on Christmas day at the home of her son in Chicago, and was brought to this place and laid to rest beside her husband the late David Dorman, in the city cemetery. She was the mother of E. E. Dorman of this city, and Mrs. Carrie Rout of Harriman. [Date: 1/3/1906, Vol. III, No. 47, Page 1]

Dowell, John: John Dowell, a highly respected citizen of Third district, was shot and killed last week by Bill Shelton, who fled and has not been captured. Dowell was buried at Smyrna, a large number of friends attending the funeral. [Date: 2/28/1906, Vol. IV, No. 4, Page 1]

Dowell, Parsetta: "Miss Parsetta Dowell departed this life on the first day of January 1906. Parsetta was a daughter of Hickman and Attaline Dowell, the eldest of a family of twelve children, and was nearing her seventy-fourth year when the summons from above said ""come up higher."" She was a granddaughter of Maj. Richard F. Cooke in honor of whom Cookeville was named. ""Pare"" by which name she was familiarly known. Very early in young womanhood she became a member of Christ's church and lived a consistent and devoted member until her death, every keeping an eye of faith on the star of Bethlehem. She had been an invalid for seven years before her death and spent many painful and lonely hours, as one brother and herself constituted the family for a number of years before her death, but, alas, the pains are over, the invalid's chair is vacant, the voice which had for so many years spoke comforting and encouraging words to the family is hushed forever; the hands which had toiled so long are folded for the last time across her pulseless breath, and the ""old home on the hill"" knows her no more forever. She was laid to rest in the family burying ground at Cooke graveyard, where her busy body peacefully sleeps beneath the cedars, . . ." [Date: 2/14/1906, Vol. IV, No. 2, Page 4]

Gilliam, Wm. S.: Wm. S. Gilliam died at his home three miles north of town on March 20, 1906, of pneumonia and was buried at Smyrna graveyard the following day. He was a veteran of the Mexican war and almost 80 years of age. He leaves a wife, one son, Jesse Gilliam, and one daughter, Mrs. Wiley Callan. Sympathy is extended the saddened family. [Date: 3/21/1906, Vol. IV, No. 7, Page 1]

Hinds, J. M.: J. M. Hinds died at his home in this city to-day, Jan. 24, 1906, with consumption. While it was known that he was low, his death came as a surprise to his friends. The funeral was held from the Presbyterian church Thursday afternoon, under Masonic auspices, interment begin at the city cemetery. The Herald extends the sympathy of the entire community to the stricken family. [Date: 1/24/1906, Vol. III, No. 51, Page 4]

Ledford, Alex: The sad news reached here Tuesday of the death of Alex Ledford of Nettle Carrier. Many of his friends and relatives were shocked to hear of his death as he had just returned a few days ago from Washington, where he had been visiting his half brother, Lloyd Shepard, and was only ill a few days. [Date: 3/28/1906, Vol. IV, No. 8, Page 3]

Morgan, Geo. E.: Geo. E. Morgan of this city was found dead on Mill creek, near the store of W. C. Gentry, about ten miles north of town, last Friday morning. It is supposed that he fell from his horse Thursday night, as the saddle was found near him, and either killed by the fall or drowned, the body being partially submerged in water. His remains were brought here and thence taken to Gainesboro for burial. Mr. Morgan was a son of the late Judge Geo. H. Morgan, and a lawyer by profession. [Date: 2/7/1906, Vol. IV, No. 1, Page 1]

Shaffer, Mrs. H. S.: Ike Barnhart and sister arrived here to-day from Michigan. Mr. Barnhart informs us that his father died last week, and that Mrs. H. S. Shaffer, who was known to many of our readers also died recently at her home in Sherwood, Mich. [Date: 1/17/1906, Vol. III, No. 50, Page 1]

Thompson, Permelia: Mrs. Permelia Thompson, wife of J. F. Thompson, died Monday morning at her home three miles north of Cookeville, after a linger illness with cancer. She was fifty-four years old and a devout Christian lady, having been a member of the Cumberland Presbyterian church for many years. She leaves a husband and several children, one of them being J. B. Thompson of this city. Her remains were interred at the West cemetery Tuesday afternoon, the funeral being attended by many relatives and friends. The Herald extends its sympathy to the bereaved family. [Date: 2/21/1906, Vol. IV, No. 3, Page 1]